Private sector higher education institutions in England are benefitting from new Office for Students registration rules that mean non-EU students can access the same work rights during studying as university students, with colleges becoming more active in recruitment as a result.

Introduced last year, the Office for Students (OfS) is the new regulator for higher education in England and registers all providers in one place.

An impact of the change is that non-EU students at private sector institutions that are OfS registered and Tier 4 sponsors will have the same rights during study as non-EU students at universities, meaning they can work for 20 hours per week.

“The difference is significant for our members,” Joy Elliott-Bowman, Director of Policy & Development at Independent HE (IHE), an association of private sector providers, told StudyTravel Magazine.

“As you would expect, part-time work rights are a key driver for our students, not only for choosing where they study in the UK, but also when choosing between countries. With many of our members focused on industry-relevant courses – in the way they teach as well as what they teach – they want to offer their students the chance to do relevant part-time work. For many, this is a clear selling point – especially the creative and professional programmes. It is unfair to international students to come to such an industry-relevant college or university but only be able to take part in the in-classroom opportunities they provide.”

Rory Curley , CEO at Central Film School, a private sector higher education institution currently registering with OfS and a member of IHE, told StudyTravel Magazine the change should benefit the institution and create more of a level playing field in higher education.

“We anticipate that the move to OfS registration will have a positive effect on Central Film School’s appeal to non-EU markets. As well as removing some of the functional differences which currently exit – access to part-time work, being able to extend Tier 4 visas in-country and institutions having the right to assess English language level using internal assessments – the removal of the ‘alternative provider’ label will put independent HEIs on a more level footing with public institutions.”

Rory stated that the opportunity to work would be advantageous and “articulate well with our mission of preparing students for entry into the world of work and more specifically the film industry”. He added that he expected to see particular impact of the changes in the Turkish, Latin American and South Asian markets.

Announcing that Study Group had become the first pathway provider to be OfS registered in the autumn last year, James Pitman, Managing Director, UK & Europe for higher education, welcomed the move towards parity that OfS provided, and said that the new rules would play particularly well in the Middle East and Asia. 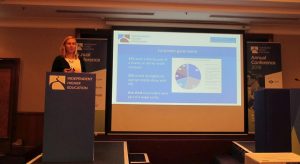 Joy Elliott-Bowman presenting at the IHE Annual Conference in November 2018.

Joy said that the move to a more equitable system is likely to see IHE members becoming more active in international student recruitment.

“From our survey, we know that many independent HE colleges and universities see this change as a great recruitment opportunity and expect their numbers to rise. They will be able to market their excellent opportunities to work alongside study as well as their in-classroom offer.”

She continued, “The change to OfS has prompted many providers to join the Tier 4 system and be active in international recruitment. This is not only driven by the new privileges they can obtain once they reach the new four-year immigration limit. For those who have not been part of the Tier 4 system, the new single regulation system which allows them to streamline the requirements for quality of education for both student loans and Tier 4 reduces the burden and cost of Tier 4 enough that it will be just cost effective enough to apply for a Tier 4 license.”

IHE has lobbied for an end to different rules for different types of provider and for a system based on individual risk, with this forming part of its 2015 manifesto, Joy said.

But she argued that there was still some work to be done in creating a true level playing field for independent institutions.

“Issues such as ensuring that no student pays VAT for their education and routes for professional training to be recognised by OfS are some that stretch across international and domestic students. The proposal to limit the additional six-month leave at the end of study to only students who study at institutions with their own Degree-Awarding Powers is another example where the government has made decisions not based on risk, but on whatever arbitrary mechanism was easiest to limit access to something students need and deserve.

Central Film School in London, which is one of the independent higher education providers on the Office for Students registration list.

The full list of 301 institutions currently registered with the Office for Students is available on its website.